Dikarya Cave sits in the highlands nearly six miles away from Sanford Village. The elves that lived in Sanford were aware of the cave but rarely paid it any mind. Expeditions were planned to explore and map it. But other seemingly more important things kept coming up. During a devastating famine, a group of elves went to explore the cave in search of anything to help the village. The cave was bigger than the elves realized with tunnels that stretched for miles. The explorers were surprised to find a tribe of kobolds there. They were even more surprised that the kobolds were unaffected by the famine that was sweeping the land.

The kobolds of the Goim Tribe claimed that their god Kudzu provided all of the food they needed. The elves were skeptical and thought the kobolds stole their food traveling merchants in the highlands. They slowly became convinced after seeing strange and misshapen fruits and vegetables growing out of the cave walls. According to the kobolds, they appease Kudzu with gifts and sacrifices to prevent it from rising up and devastating the land.

Food in Sanford Village was growing scarce and the elves were desperate enough to try to bargain for aid. They were led into the depths of Dikarya Cave where they came face to face with the kobold’s god. The elves were shocked to find that Kudzu was a plant creature of unbelievable proportions. They were expecting a stone idol to a dragon or demon lord at best. The elves recognized it as one of the kaiju and were chilled to encounter such a creature so close to their home. They knew of the devastation kajiu unleashed and how almost nothing can kill one. But after seeing the bounty of food it provided the kobolds the elves reluctantly pledged themselves to the creature. 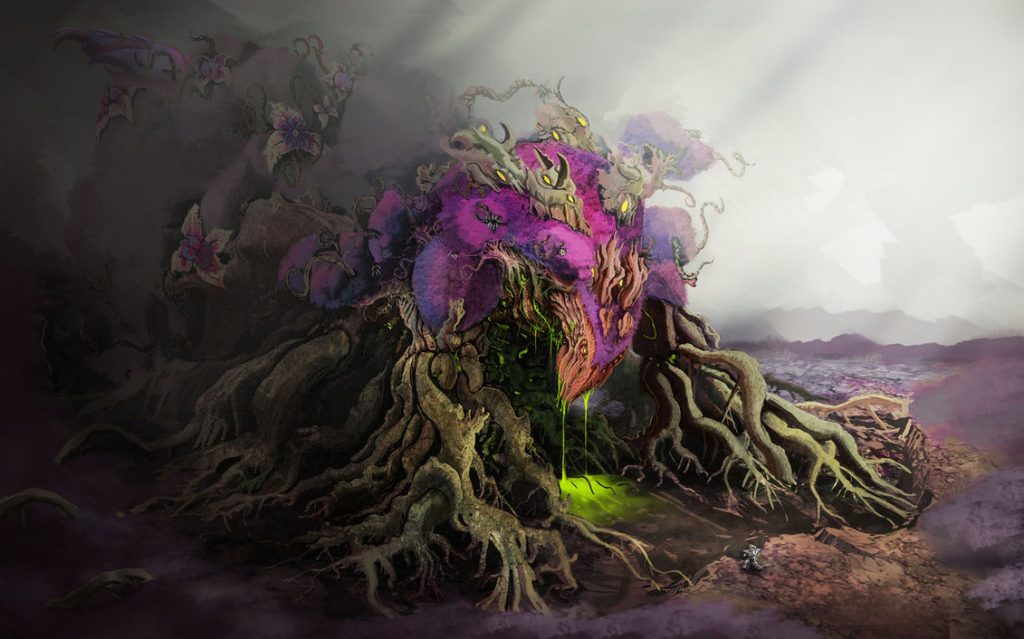 The elves of Sanford Village are now keenly aware of Dikarya Cave and the threat it holds over them. They know they have condemned themselves for the continued survival of their village and the surrounding kingdoms. The elves call Kudzu The Everblight because of the stain it has left on their souls. Every spring the elves must provide a dozen humanoid sacrifices. They prefer to sacrifice outsiders, usually merchants or lone travelers. Some years they are unable to gather enough strangers. When that happens, the elves accept volunteers or hold a lottery to select someone from the village. Druids, rangers and anyone else who holds a strong connection to nature is viewed with low key hostility in the village. The elves fear that their annual sacrifices could be uncovered.

The kobolds of the Goim Tribe act as intermediaries between the elves and Kudzu. Members of the tribe all share the same dark brown scales with mossy colored patches. They are led by their high priestess Aphelida  She directly oversees the sacrifices made to Kudzu. The kobolds have been thriving ever since the elves began making their sacrifices. Kudzu provides more food now allowing for larger kobold families. Gangs of them will roam the tunnels and prune the roots and vines that crisscross their cave tunnels. To help out the elves, the kobolds will try to waylay travelers and redirect them to the Sanford Village. They will set traps to damage wagons or injure horses forcing travelers to stay in the village.

Kudzu, The Everblight sits in the deepest caverns of Dikarya Cave. It has not stirred from its cavern in centuries. Its roots have spread throughout the cave system and into the surrounding countryside. Kudzu is aware of much that goes on in its domain through those roots and spell-like abilities. Besides Kudzu, moldwretches huddle in the darker corners of the caverns. They prune browning leaves and dead bark off of their master. The moldwretches also act as spies for Kudzu. They will watch for potential revolts going on among the kobolds or the elves. Kudzu cares little for his worshipers seeing them as nothing more than insects. It only provides them with food to encourage the sacrifices.

Not all of the elves of Sanford Village are content with the arrangement with Kudzu and the kobolds. Some of them have been covertly searching for ways to back out of the agreement without angering the kaiju. The guilt of sacrificing all of those innocent people has become too much of a burden. Khione, the owner of the village’s tavern The Golden Rose is one of those malcontents. He has been in secret communication with a powerful winter witch from a neighboring kingdom. Khoine has been arranging for the witch to come to the Sanford and free the village from Kudzu’s grasp. The plan is to have the witch create a magically extended winter. This could, in theory, weaken Kudzu enough for the village to successfully rise up and slay the kaiju. Knowing how this plan would be received by the rest of the village Khione has kept it to himself.

Normally the offerings to Kudzu go smoothly. The chosen sacrifices are drugged, bound and given to the kobolds who present them to Kudzu. This year, however, one of them woke up during the ceremony and managed to escape. The poacher Sephort is the only human to ever see Kudzu and live to tell the tale. The experience was too much for him to grasp however and it drove him mad. He now wanders the forest near Sanford Village unable to process what he witnessed during his escape. Knowing they must keep the conspiracy going, the mayor of Sanford has put a bounty on Sephort’s head. The village says he is a dangerous lunatic who needs to be brought to healers for treatment.

The cavern tunnel is damp and the sound of dripping water can be heard off in the distance. The hallways are thirty feet wide and strewn with, rocks, vines, and piles of refuse. The moss on the cavern walls is oddly verdant with edible fruit growing in irregular bunches. Three archer bushes are hidden among debris along the cavern floor. They wait until a PC is out of melee ranger before letting loose a thorn attack. Once discovered, they give up all pretense of hiding and fight to the death. Three kobolds also lie in wait away behind rocks. As soon as an archer bush is killed, they burst from hiding. The kobolds charge towards the nearest PC, hoping to land a few hits in the confusion.

The Town of Grover’s Mill

Michael has been playing RPGs regularly since 2012. In addition to RPGs he's also a fan of puns and bad movies. He hopes you will enjoy these trips through his imagination, and asks you to please wipe your feet.

View all posts by Michael Vail-Steele →