Welcome to 3rd-Party Highlights, where we bridge the gap between companies that aren’t just Paizo or Wizards of the Coast. If they can be found as Open Gaming Content, they’re fair game.

Note: As we tackle new articles of this nature, we wanted to provide an idea of what’s in store. With the release of Play Manga d20, Kevin Glusing introduced a system against which all Pathfinder classes can be balanced. Across 20 levels, each core, base, alternate, and hybrid class totals to 300 points, with the only exceptions being the monk, rogue, and summoner, which upon release of Pathfinder Unchained were likewise balanced (the unchained barbarian only modified how rage works, so either version still totals to 300 points). This is the system we are going to apply to the content we look at in order to give an idea of where we feel it falls on the power scale. Having more or less points isn’t necessarily bad, it’s just something to be aware of when you play as the class. We’ll do what we can to provide our suggestions on how to bring something closer to that total.

Speaking of Unchained, after the release of that book, Rogue Genius Games and Everybody Games (formerly Everyman Gaming) released their spin on an unchained ninja class, riffing off the fact that the existing ninja from Paizo was an alternate class for the original rogue. Today, we’ll take a look at both and see how they hold up. So break out your spreadsheets and calculators, this article’s going to get technical.

When Paizo first introduced the rogue to Pathfinder, they expanded on 3.5’s special abilities, turning them into rogue talents. This helped to better illustrate the contrast between what that edition was and what it could be. However, many felt they didn’t go far enough, that when compared to some of the additions they made to other classes the rogue got the short end of the stick.

Going by our point system, Paizo’s rogue (as well as the monk) totals out to 281 points, which lines up with that thinking. And, with the introduction of the unchained rogue, it looks like Paizo agreed (more on this in a moment).

Enter the ninja. It still gets sneak attack and talents (now tricks), plus a ki pool (6 points) that feeds some of those tricks. Light steps is worth 2 points because it’s on par with a rogue talent or a limited bonus feat in power.

Ki pool for a ninja is 2 points, same as a monk. It also includes an equivalent to the monk’s ability to ignore DR, which is worth 4 points, so it totals to 6.

Hidden master, is also considerably stronger than master strike (which is 3 points). Let’s break it down for a moment.

Which brings hidden master to 7 points and the point total for the ninja to 292, which is closer, but still not quite 300 points. Coincidentally, the slicing wind alternate capstone presented in Pathfinder Player Companion: Chronicle of Legends is more on par with master strike (more on this at the end). 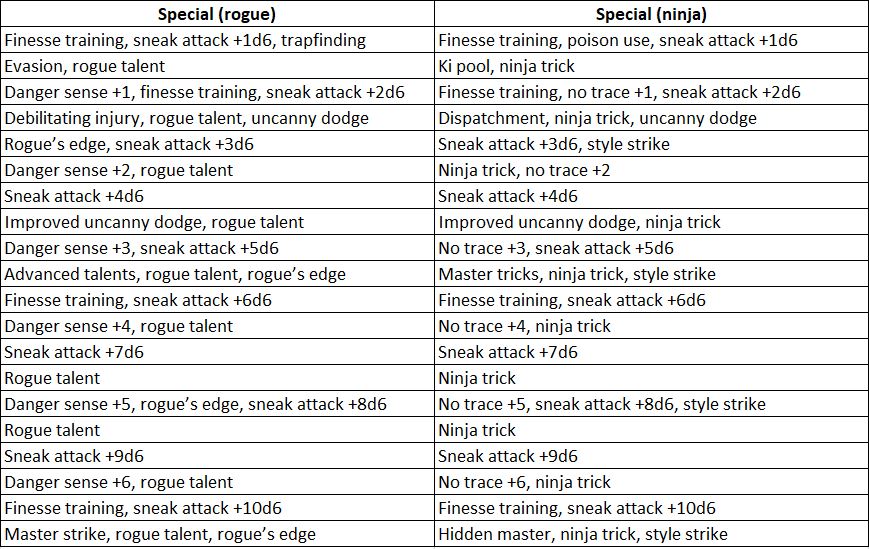 The unchained rogue, as featured in Play Manga d20, clocks in at 300 points. We’ll assume the unchained ninja starts there.  All the ki aspects (ha) are still there. Hidden master is unchanged, which means we’re still going to count it as 7 points here.

All things considered, this means the unchained ninja rounds out at 308 points. Is that a lot? It’s worth about the same as 4 additional ninja tricks, 2 of which are gained at 2nd level and 2 more at 20th.

What puts the class over is not inherent in the changes made by the author, but in the decision to leave ki pool and hidden master unchanged. Since those abilities were already added to what was in all other ways an equivalent rogue, keeping them as is for the unchained version (which itself is compared to the balanced unchained rogue) means pushing the class just over half a level stronger than other Pathfinder classes.

We could make the extra powers tacked onto ki pool into talents the way we did light steps and use the alternate capstone just like the ninja. Doing so would balance to 300 points exactly. Considering hidden master is the capstone, you may not feel it’s necessary to limit it in the long run. The reward, as always, for a long journey to the end. 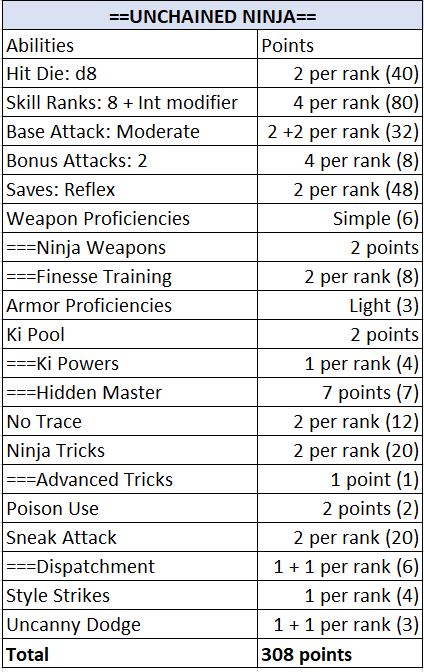 And for the level by level breakdown.