Welcome to 3rd-Party Highlights, where we bridge the gap between companies that aren’t just Paizo or Wizards of the Coast. If they can be found as Open Gaming Content, they’re fair game.

Today’s post seeks to create, rather than review, content in the form of the divine curator class. A request came in this month through the Name’s Games Patreon for a Pathfinder base class with an eye toward forbidden lore and the ability to cast divine spells using a spellbook. This class would study monsters often seen as counter to religious beliefs, such as aberrations, magical beasts, outsiders, and undead, then grant bonuses to the character and her allies against them. It would be to the inquisitor what the wizard is to the bard.

Without any previous reference to work from, we started archiving the information we could related to this request. If such a class had existed in 3.5, it would probably be worth around 275 points (using our point system we referenced in our Unchained Ninja article), which would make it stronger than other 3.5 classes, but not quite up to the power level of Pathfinder’s core rogue class. Almost 2 level’s worth of class features are missing from this hypothetical class, so we’ll start this creation process with the goal of reaching 300 points total.

Going on our guidelines above, we can start with the wizard as a chasis and strip out the things we don’t need.

Since this is a divine class, it doesn’t receive arcane spell failure. Rather than create a whole new spell list, we’ll give the curator access to cleric spells (more on this in a bit), which are 7 points per spell-level rather than 12. Sticking with the cleric theme, they should also be a little better at surviving, so let’s give them simple weapons and medium armor for proficiency. They need their hands, though, so no shields. They’re also still studious, despite understanding weapon use, so we can keep the d6 Hit Die and poor base attack, similar to sorcerers (this also helps keep them from being just different from clerics).

After ditching bond, the arcane school, and bonus feats, we’re left with a total of about 257 points. That gives us 43 points to work with in building this class.

It’s About What You Know

Time to start adding. For starters, this is a lore/skill class, so 4 + Int skill ranks per level fits. I’d go 6+ (like bard), but with the class already relying on Intelligence for spells, it kind of already has that boost built in (similar to wizard).  When talking class features, we know they’ll need scribe scroll, and lore master’s a shoe-in, but we need something a little more original. How about something that lets the class get special bonuses against monsters? Like a forbidden knowledge of sorts. They can pick a new option every couple levels and make special monster lore checks to gain the benefits. Since this is Pathfinder, where there’s always some choice to be made, we’ll also give them their own talents, called cryptic studies. These can further improve the forbidden knowledge ability or grant other appropriate bonuses like languages, different spell options, or skill-related feats. To help prevent as many dead levels as possible, we’ll place cryptic studies at 2nd level and every even level thereafter. This actually rounds the class out nicely and leaves us with a total 300 points, as planned. 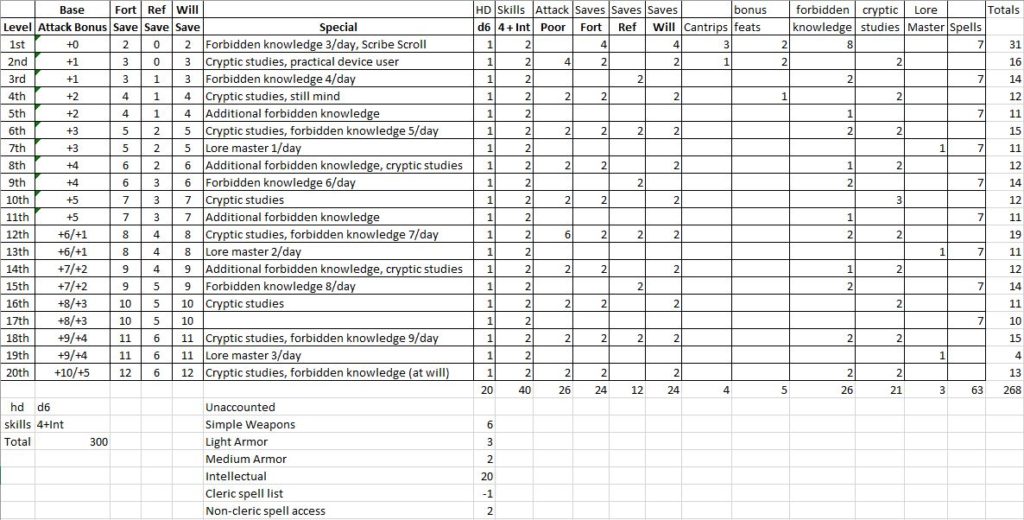 If you want to see the divine curator in action, you’ll find it in the June 2020 compilation for Name’s Games, as well as the eventual full annual release similar to the one we put out in April for 2019. We’ll also share the class over on d20pfsrd.com (and come back to link to it here) once it’s fully playtested and released.

Of course, I can’t take all the credit here. The class was, of course inspired by and created in homage to several related options past and present.