The number of RPG crowdfunding campaigns is still down from its pre-holiday season height, but as Kickstarter bulks back up with a variety of new games, I’ve sifted through the adds to share a company’s battlemat, an adventure that is compatible with Starfinder and d20PFSRD.com’s Starjammer, and one that’s caught its second wind and reached its goal. I’m looking at: 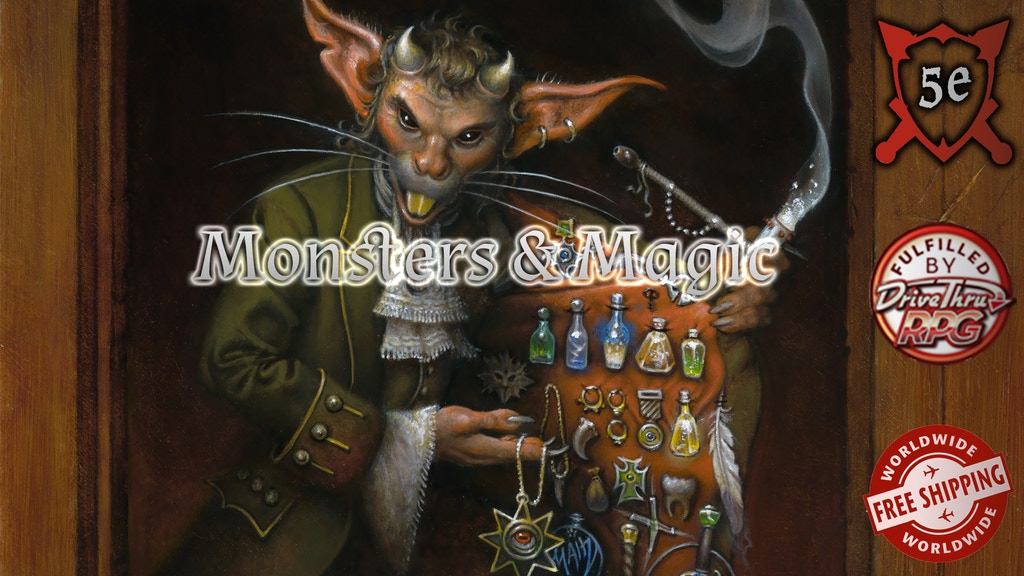 “A compendium of adventures, creatures and treasures for your favorite RPG.

Get ready for more than a hundred monsters and a hundred magic items inspired by European legends. With an average of two pages dedicated per monster, every entry contains a ton of background information and extras, including min-adventures, adventure hooks and items. The stats blocks included are designed for 5e D&D, but this book holds treasures for every RPG enthusiast, no matter which system you prefer, or if you just like to read. Check out our update section for bi-weekly updates and previews!

For GMs: Every monster is designed with care and detail, including introductory tales, descriptions of their biology, behavior and history. We’ve included optional rules, monstrous hooks to inspire you, and mini-dungeons that will provide hours of entertainment. Both the monsters and magic items in this book have been designed to be of use to you no matter which tier your heroes are currently. But there’s more…

For players: You’ll find new playable races, pets and familiars, useful new tools and awesome magic items. We’ve even listed the parts of the book that are useful for you specifically- just in case you want to avoid spoilers. Diligent readers will find some links to our On the Shoulders of Heroes campaign setting, but all creatures have purposefully been designed to fit into any fantasy world.

You’ll get the chance to get your hands on our product at a much lower price before it becomes commercially available. All tiers include free worldwide shipping. Some of our most generous backers get the chance to be in the book in art-form and to help us design some monsters.”

Do you need more magic and monsters for Dungeons & Dragons 5e? I feel that 10 out of 10 GMs would answer that with an affirmative. If you’re in that pool, then Windmill Slam Games has you covered with a book best described by its title, Monsters & Magic. Over and above that, if they reach their stretch goals then they’ll add mini-adventures and additional chapters. This is Windmill Slam Games’ second attempt at this book, but for this go they’ve reinterpreted how to approach the product, lowered the goal, and designed a more succinct crowdfunding pitch that seems to better connect with their fans. Another win for everyone involved, they’re not trying to fund it during the holiday season when money was tight. While the PDF-only backer level is still €15, for the relaunch they’ve lowered the print/PDF combo to €34 and provided free shipping so you can try out their work.

“The fourth of six Starfinder RPG compatible adventures, a mystery to add to your game or create a new one.

WHAT’S THE FOURTH EPISODE ABOUT?

This episode introduces the second part of the adventure path. In this module the players  will change their characters and swithc faction. In the first part of the adventure path (episode 1,2 and 3) you roleplayed the members of the so called “Federation”. The second part introduce your players to the fascist-like power known as the “Dominion”. The Dominion is a coalition of humans, dwarves and dark elves and all the three races are from the same solar system. This adventure specifically, takes place on the remote planetoid known as Charon I, which orbit a red dwarf star known as Charon Prime. The outpost is registered as Outpost 49. Do you remember the last episode, “First Strike”, where the PCs arrived to a Dominion’s outpost to seize a powerful radio telescope? Well, that planet was Charon I. The former PCs successfully attacked and destroyed the garrison on the planet and completed their mission to send a warp signal to the Federation headquarter. However not all the garrisons were slaughtered. Some of them survived. The survivors are our new characters. They are well trained and loyal soldier’s of the Dominion military might, but now they are alone on Charon I. They are aware that their comrades, all of them, are no more. You were patrolling the border in you light war tank, trying to repair a messy engine. you got stucked for hours while trying to repair the damage. You were lucky. Because if you weren’t out there you would be death. You listen your comrades calling for help at the radio, powerless while they die one by one by the hand of what you assume to be a federation surprise attack. The slaves assigned at the mines take advantage of this attack to start a revolt and seize the mining facility. As a soldier of the Dominion you can’t tolerate such acts. Quench the rebellion at the mines. Explore the radio telescope and discover more about the surprise attack. Reach the only ship available on the planet before the rebels do and join the fleet to warn the high command that the fragile truce has been broken.

ABOUT THE NEW CONTENTS

This adventure put emphasis on vehicles and ground skirmish. The light war tank is a key element of this adventure, the PCs will need it to complete the mission and stay alive. If this were Pathfinder you’d be using horses, donkeys and chart. Well, a good party of adventurer need something to move quickly and safely. There come the tank.

Dominion’s arsenal is full of advanced devices, this includes weapons. To mantain its military might they produce special weapons hard to buy on the free market.

We present 3 new creatures (maybe more?) native of Charon I.

The “Equos” cargo ship, the only ship docked on the planet. A fast cargo made to deliver shipments quickly and safely through the danger of the void.”

Since the first installment, I’ve followed Davide Tramma (ANGRY GOLEM GAMES) as he’s developed his 6-part Starfinder adventure module through Kickstarter. This is the 4th part and he continues to build one of the largest 3PP Starfinder products out there. The prior books – Distress Call (38 pages), Descent (78 pages), and First Strike (84 pages) – suggest that this adventure will be a sizable project and when all 6 parts are out, FROM BEYOND should be around 400 pages in total. That’s massive for a smaller publisher but Davide is taking this one step at a time and building a solid sci-fi product chapter-by-chapter.

One other win, fans of d20PFSRD.com’s Starjammer system may want to take note of this adventure to use with their Starjammer games. While Starjammer is based on Pathfinder 1e (as is Starfinder) there are some differences, yet they’re small enough that the FROM BEYOND series should be something to grab and play without serious challenges.

Questions about the system? Check out Starfinder’s System Reference Documents (SRDs) at: http://www.starjammersrd.com/

“Double sided quality mousemat skirmish game battle mat offering the best of both; terrain on one side and a starscape on the other.

We are launching an innovative new product – A double sided neoprene tabletop battle mat combining a space image & a terrain image. One Mat for many games and the perfect underlay for miniatures wargaming as well as board, card, tile and dice games.

There are two design combinations available.

Created by Loke BattleMats, this Kickstarter aims to expand on our range of neoprene battle mats by adding two new reversible skirmish mats.

These mats feature one side showing a space backdrop ideal for dog fighting space craft and the other side showing a terrain design for down to earth skirmishes.

These mats are 3′ x 3′ in size, made from double-sided mousemat (neoprene) material and have a durable stitched edge.

Featuring exclusive designs from Loke BattleMats, these 3’x3′ mats offer you the best of our designs combined for the first time in one mat to cover a huge range of tabletop games! Saving Money and space, these are perfect for the travelling gamer as well as removing the need to buy multiple mats for the keen hobbyist.

Lets start with the material.

The mats are 2mm neoprene with a stitched edge, giving you a high-quality heavy weight feel. Each mat weights 1.3KG and will, of course, lay perfectly flat under its own weight. Sturdier and heavier than PVC or cloth, these mats are thick enough to deaden your dice rolls and will drape beautifully over a table edge if needed. So huge versatility and no more lost dice!

Loke BattleMats have also added our trademark stitched edge to these mats. This gives a really beautiful neat finish and ensures the mat will last you for years with no separation of the layers of fraying.

Now let’s look at the images.

The material carries a vibrant stunning image (check out the prototypes in our video and images) and we have combined our favorite designs into these unique mats. Available in Red Stars/Grass and Blue Stars/Desert these designs offer infinite possibilities for miniatures wargaming as well as a vibrant backdrop for cards/tile/dice/RPG/board games.

By combining these stunning images we create a mat for all occasions!”

I’m going to approach this thought in a different way and assume that prior products predict future performance. My editor on the OGN, Kim Frandsen, wrote a review of another BattleMats’ product (here) and he cannot say enough good about it. His review is for Loke BattleMats’ The Big Book of Battle Mats and The Giant Book of Battle Mats. In it, he shares the extreme quality of these products and how ready for play they are. While their current Kickstarter is for a different product than the review covered, generally speaking, a company’s quality can be predicted on its prior work. While a book of dry erase maps is not the same as battlemats, its close enough that I expect these to be of the highest quality. Kim’s review makes backing Loke Battlemats’ latest Kickstarter, Reversible Neoprene Space/Terrain Battle Mats, an easy decision.

Looking for more RPG crowdfunding projects? I’ve launched a Youtube series on them and you can see the first episode here.