For those that celebrate it, tomorrow is Christmas (and for everyone else, it’s Tuesday). For many, there’s a lot going on, and for those that are looking for a break from that “lot”, there are new tabletop RPG fixes to consider so here are a few odds and ends for the holiday. This week, I’m looking at a city for 5e, and bringing around an old article.

The Streets of Avalon by Encoded Designs

“To publish the Streets of Avalon, a mega city sourcebook for the 5th edition of the world’s most popular RPG.

Welcome to the Streets of Avalon. This massive fantasy city holds adventure, intrigue, and a darkness that comes from its denizens, both above and below. This Kickstarter is to fund the sourcebook for the city of Avalon along with additional material through stretch goals to add more darkness to the city and provide supplemental material for the world’s most popular role playing game.

The Streets of Avalon has a gazetteer of the city covering the people who live there, the areas of the huge city, the economy, festivals, religions, guilds, noble houses, weather, seasons, magic, monsters, and a partridge in a pear tree. It’s all in the gazetteer.

There’s also a GMing section which provides advice on how to make the city of Avalon come to life and what gives an Avalon game its distinct feel. It also covers the idea of the neighborhood as an adventure location, having a base of operations, and a number of adventure types: Political Intrigue, Dungeon Crawling/Treasure Hunting, Heists, Investigation/Crime Solving, and Monster Hunting. The final part of this section has information on the races and classes that exist in Avalon, how they function within this setting, and what changes you might need to make, if any.

Then, three example neighborhoods are provided which you can use to run your adventures in Avalon right out of the book if you’d like.

There’s also a lot of flavor in this book. Art, letters, quotes, and sidebars which help GMs and players understand the tone of Avalon.

The Streets of Avalon

I clipped together this quote from different parts of The Streets of Avalon Kickstarter campaign page:

“Welcome to the Streets of Avalon, a mega city sourcebook for the 5th edition of the world’s most popular RPG. This massive fantasy city holds adventure, intrigue, and a darkness that comes from its denizens, both above and below. The Streets of Avalon is planned to be a 6″ x 9”, 110 – 130 page book, with black and white interior art.”

That paragraph is enough to let you decide your level of interest in reading more about this campaign. It’s probably not enough to back it, but it gives you an image of what they’re producing: 110 to 130 pages of fantasy city for D&D 5e. To decide if you’re going to back it will depend on your tastes, their previews here and here, and the creators. I’d recommend seeing the campaign for yourself (here) and deciding if you’re like to visit Avalon.

This crowdfunding campaign ends on Thu, January 17 2019 8:58 AM EST. You can support this Kickstarter campaign here. 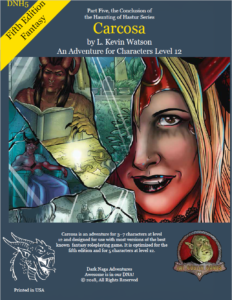 While looking back over 2018 and perusing the Open Gaming Store, I spotted Dark Naga Adventures’ Haunting of Hastur Part 5: Carcosa. In June 2018, on the Open Gaming Network, I interviewed Kevin Watson (here) of Dark Naga Adventures about his then funding Kickstarter for that product, the fifth and final adventure in the Haunting of Hastur series. As the year draws closed, it’s a good time to bring that back for another look.

What is the Haunting of Hastur series? Available for Dungeons & Dragons 5e and OSRs, this is “a five-part series of adventures that find the party members interfering with Hastur and his attempts to establish a presence in their world. All the products from Dark Naga adventures are nonlinear, more sandbox, and include ways to solve the issues beyond combat.” Read more about it in the interview (here).

As the final adventure, this was the culmination of Kevin’s unspoken promise in the first Kickstarter for part one – To create a complete campaign. With that accomplished, you can check out the 5th part (available via the Open Gaming Store) as well as the other parts: