I hope the holidays have been, and continue to be, good to you! This week is a quick review of two year-end/year-begins projects, one through Indiegogo, the other through Humble Bundle.

“A group of adventurers in a distant town are blackmailed into an unusual errand. The court wizard requires the capture of a local troll and delivery – alive – for study. Into the wilds they search for the clues; clues foreshadowing a perilous battle, a slippery bridge, a dangerous waterfall and a fearsome and angry fey. All in addition to the unsubdued troll. Not exactly a Saga of old, but the day is young as the group slips into the dark woods.

When the group of adventurers arrived in the outpost town of Ravenreach they headed directly to the local tavern. As was usual, it took under the hour until fists started flying, glassware shattering and furniture flying. The fighting ended, just as the last of the locals melted away.

Their incarceration made the wanderers the ideal candidates for an unusual errand. The Master Minder, the court wizard, requires the capture of a local troll  – alive – for his studies.  Without hesitation they accepted the task and into the wilds they went.

Not exactly start to a Saga of old, but the days are young as they slip into the dark woods.

Menace in Ravenreach by James Thomas- available in Fifth Edition, Pathfinder or Swords & Wizardry versions, is an adventure for mid-level characters. We expect this will be the only time we offer the premium softcover version for sale.

Within its covers (or the digital PDF file) you will find:

Menace in Ravenreach uses the same formula introduced with our last Indiegogo, we refer to this method including the focused enhancements (stretch goals) that improve the product as total project funding increases with art, extra content written content and digital play enhancing extras (player handouts etc) as…“

For Dungeons & Dragons 5e, Pathfinder 1e, and Swords & Wizardry from Frog God Games and James Thomas, this adventure continues their pop-up, fall/winter Indiegogo campaigns like How Orcus Stole Christmas! A Holiday RPG Adventure, and In Vino Gigantus: A Fantasy RPG Adventure.  These are quick adventures funded through short campaigns. Through these campaigns, FGG continues to support their in-house system, Swords & Wizardry as well as Pathfinder 1e and, of course, 5e. What makes this a standout project? It’s part one of two with the second part to be funded in the first months of 2019 and I’m interested to see the rest of this come about.

For examples of this publisher’s games at the Open Gaming Store, and the game’s System Reference Documents (SRDs) at:

This crowdfunding campaign ends on Monday January 7, 2019. You can support this IndieGoGo campaign here.

“HUMBLE RPG BOOK BUNDLE: 5TH EDITION FANTASY – DRAGONS, DUNGEONS, MAPS AND MORE
Is your game draggin’? Perk up with this book bundle from Frog God Games and a host of other awesome publishers! It’s packed with adventures, sourcebooks, maps, decks, and other resources supporting the Fifth Edition of a certain ever-popular roleplaying game.” 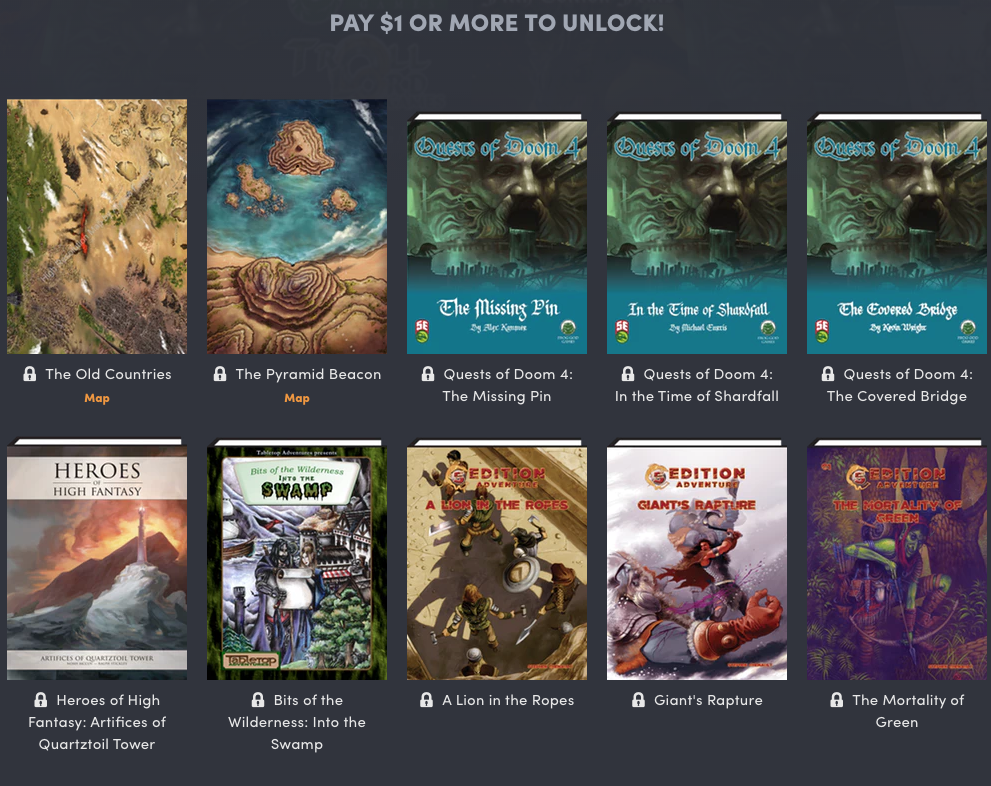 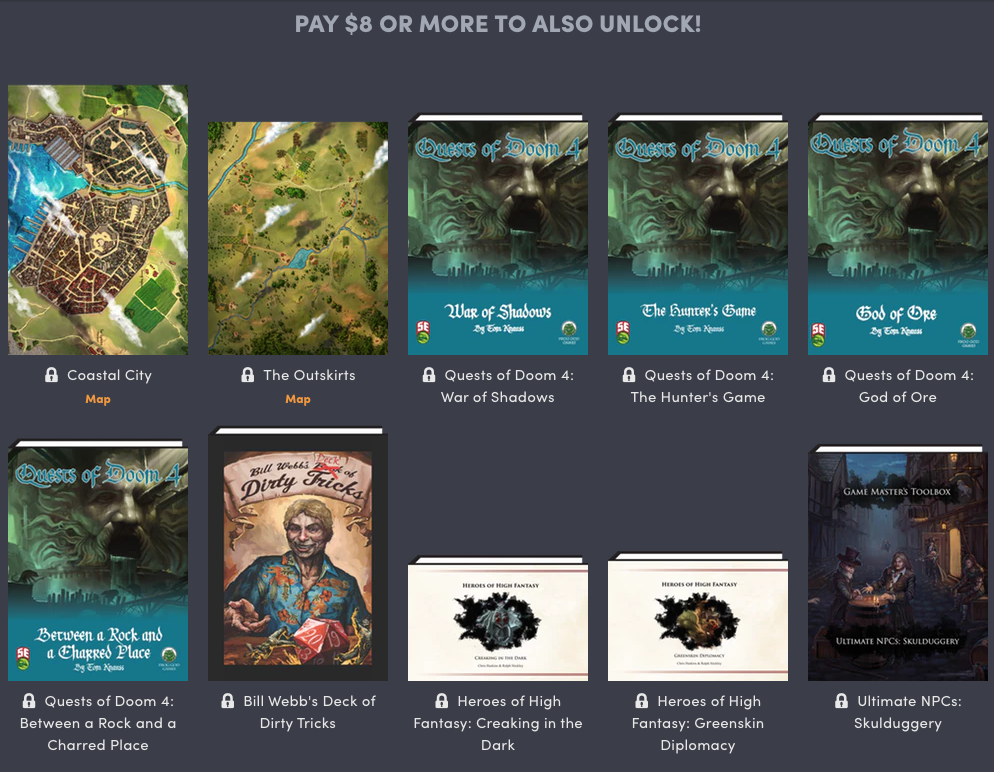 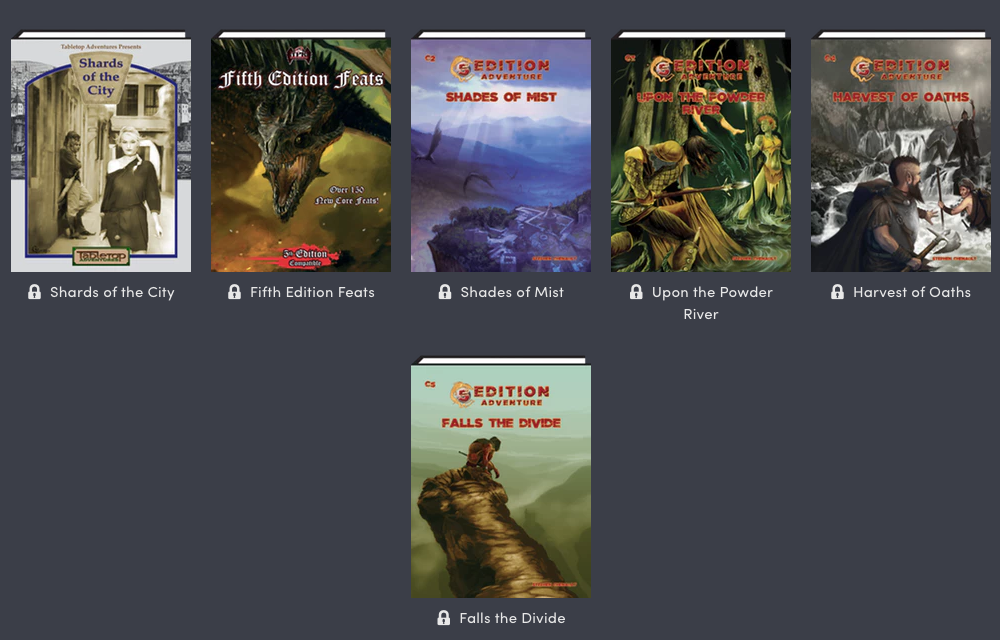 Above is just a sample of what’s available through this Humble Bundle. Featuring Dungeons & Dragons 5th Edition content from some of the biggest third-party publishers in tabletop gaming, this bundle lets you buy-in at several levels:

This is a collection of rules expansions, adventures, maps, and 2D and 3D printable miniatures/models for your gaming table. The cost per product makes this collection an easy grab. Add to that, you can determine how much of your payment goes to their selected charity, Hospice of the Northwest. This lets you make the world a better place while improving your gaming table.