On my personal site I’ve done three interviews with Ed Jowett of Shades of Vengeance and one Era: The Consortium gameplay review because I’m a fan of Ed and his system, Era d10 Rule Set. If you’re not familiar with the Era d10 system, it’s designed to facilitate every type of setting from space opera to fantasy. With Ed’s current Kickstarter for Battlecruiser Alamo RPG (Powered by Era d10), he’s testing some new concepts and agreed to discuss what he’s building for the gaming table.

EGG EMBRY – Thanks for talking about your Kickstarter with us. What is Battlecruiser Alamo RPG (Powered by Era d10) about?

ED JOWETT – The Battlecruiser Alamo RPG is based on the series of novels by Richard Tongue. It aims to capture the feeling given by his first three novels: that of a Triplanetary Confederation still finding its feet with enemies within and without! Betrayal may wait around every corner but the possibilities for exploration with human colonies beyond explored space being discovered, aliens roaming outer reaches and the chance to discover things that no-one has seen before, still draws people out to explore. 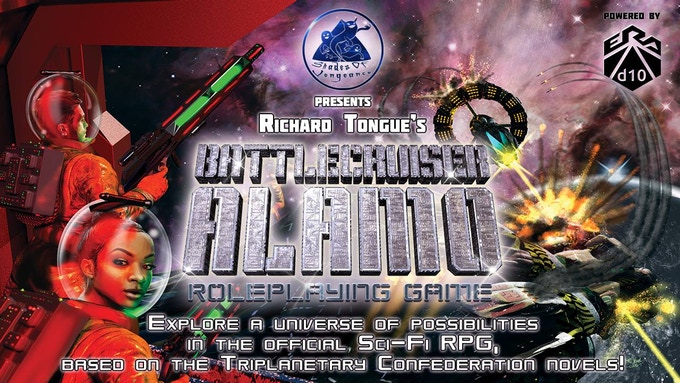 EGG – You’re the mastermind behind Shades of Vengeance and the Era d10 Rule Set for Era: The Consortium, Era: Survival, Era: The Empowered, and more. What makes the Era d10 system work for such a variety of settings?

ED JOWETT – I think it’s the fact I designed it with that in mind from the beginning. Although the first game that I created was Era: The Consortium, a Sci-Fi game, I always intended for it to be used for other things. In fact, before Era: The Consortium was released, I had been playing a high fantasy game using an adaptation of the rule set. I’ve discovered I have a bit of a knack for adapting these rules to make them fit the setting and genre and, with just minor modifications, the rule set supports it very nicely. It even supports cross-genre play, such as incorporating survival horror rules from Era: Survival into Era: The Consortium for an “Alien” or “Dead Space” type game! I’m very proud of the Era d10 Rule Set – it does exactly what it needs to for every game!

EGG – This is Shades of Vengeance’s first license, correct? What made Richard Tongue’s novels the right fit for Era d10 Rule Set and SoV?

ED JOWETT – That’s right! Richard and I are very much like-minded individuals. His Battlecruiser Alamo universe and my Era: The Consortium universe come from a similar set of experiences, a lifetime of the science fiction which was available in England and from reading the same sorts of books. Actually, it was a little spooky the first time we sat down and started to discuss the limitations of the universe. He gave a session of Era: The Consortium a go – in fact, I believe you played alongside him as part of Stiletto Unit at that AetherCon session! – and felt strongly that this was an excellent match.

While Era: The Consortium covers every sub-genre of Sci-Fi, the disposable nature of certain types of characters in the Battlecruiser Alamo universe offered something additional which had not yet appeared in Era games, and anyone who follows my work will know I’m always trying to expand the Era d10 Rule Set with everything I do! So, for both of us, it was an excellent match-up. 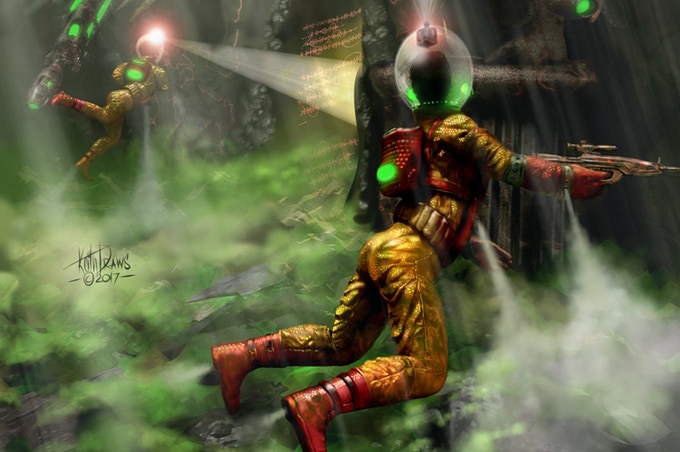 EGG – How much of this project’s content will come directly from Richard Tongue?

ED JOWETT – Roughly half of it comes straight from him – he’s volunteered to write everything relating to the setting, so short stories, the summaries of locations and factions, the secrets of the setting and the campaigns have all been written by him. It comes to a little over 100,000 words in total, and he describes it as the “definitive guide to the Battlecruiser Alamo universe”.

EGG – This RPG’s “gimmick” if you will for Battlecruiser Alamo RPG (Powered by Era d10) is the dual character system. How will that work?

ED JOWETT – Well, it works by having the potential for two parallel, simultaneous storylines. It will be very rare that the officer and the Espatier meet in this game – instead, one will go down to the planet or board a hostile vessel and the other will remain on the ship to make sure it’s at peak efficiency.

This allows brand new options in terms of storytelling, particularly with regard to making the players feel set upon or allowing a character to die without ruining that player’s entire campaign. For the players, it gives the chance to have a variety of characters, which adds a lot of relief in longer campaigns, where playing the same character every session for 100 sessions can get a bit tedious. 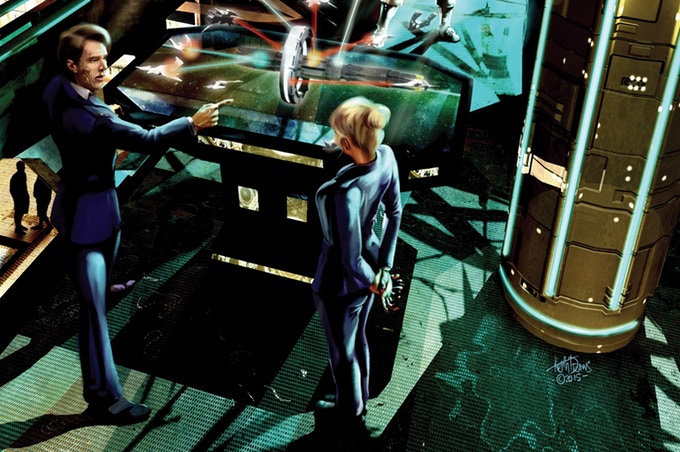 EGG – Thanks for talking with us. Where can fans find out more about your Kickstarter, Shades of Vengeance, and Richard Tongue?

ED JOWETT – You can find out more about the Kickstarter right here: https://www.kickstarter.com/projects/shadesofvengeance/battlecruiser-alamo-rpg-an-era-d10-game?ref=3l8sgy

Richard Tongue has a blog here: http://richardtongue.blogspot.co.uk/p/battlecruiser-alamo.html and if you want to get hold of one of his books, they are all on Amazon: https://www.amazon.co.uk/dp/B00DN8XKIK?tag=geolinker-21