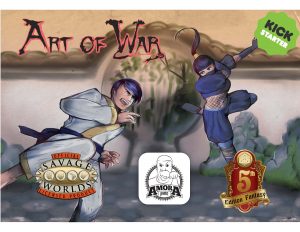 The Tentacle is BACK BABY!

After a too long of a hiatus, I’m back for another riveting rendition of the things we have been working on at Amora Game.

As many of you may or may not know, we had been publishing material from our Xeno File series here on the Open Gaming Store under this moniker. Our last article was November 2 of last year. What have we been doing with ourselves? What have you been doing without us?

This Tentacle has been busy working on a little project called Art of War. Let me go ahead and set this up *queue the elevator music* and give you the elevator pitch.

Amora Game, LLC has launched a Kickstarter for a campaign setting called, Art of War. Art of War is an Eastern fantasy setting inspired by the Three Kingdoms of China and the Sengoku Period of Japan. Art of War is powered by Savage Worlds and 5th Edition of the world’s oldest role-playing game.

It is the start of a new dynasty for the three Providences of the San Empire under a new Emperor. The three Great Clans bicker among themselves as the dust settles after an Oni invasion. The land needs heroes to protect the people from hungry ghosts, renegade bandits, encroaching Nagas, flesh-eating Oni, tyrannical feudal lords, and inter-clan territory skirmishes. Will you join the call and become a Legend?

Both settings introduce the Chi System, Chi Techniques, rules for dueling and 7 new playable races. Players can choose to be members of a Great Clan, pledge to defend the Imperial family, or travel the countryside as wondering heroes. Art of War gives a little wuxia action allowing for over the top cinematic or brooding gritty dark sagas.

The Chi System mechanics works in accordance to ki class feature of the Monk class, but redesigned as a subsystem to function for every class. Chi Techniques work similar to spells in 5th edition. This allows characters to have one or two over the top specializations like, Shadow Clone where you can momentarily create a double of the character, or Scorpion Sting that acts as though you have struck an opponent’s pressure points. The Tropes presented in our 5th edition act as class paths for the various classes. The Shinobi trope is a path for the rogue class. The fighter receives the Path of the Samurai as a viable option. The Youxia trope is available to both rogues, rangers and fighters. Each one taking on a variation of the concept. The 5th Edition version of Art of War introduces numerous new Backgrounds, Inspirations, new Feats, and equipment.

Over the coming days, I’ll be attempting to sneak away from the work station to come here and share some good dose of 5e Content. We’ll start by previewing the Kemonomimi for 5e.

Until then, Tentacle out!

Tentacle Greg (Greg LaRose) is the owner of Amora Game. He likes the anime and manga. Martial arts & samurai films. All things food. Gaming. All Platforms.

View all posts by TentacleGreg →