The Kickstarter for The Cruellest Mistress of All. An adventure for d20 rpg’s introduced me to John R Davis and his Viking-esque RPG ideas. Through a vanity press reward for the campaign, I contributed a location and NPCs for the adventure, it was a fun write up. John has another Kickstarter campaign running through April 13th, 2018, this time for The Shadow Over Dunsmore Point.

EGG EMBRY– Thanks talking to us about your latest project; what’s it about?

JOHN R DAVIS –Hi Egg, thanks for the invite. The Shadow Over Dunsmore Point is a mini-campaign with a Mythos like feel, but still firmly a D&D adventure. There is stuff to explore, mysteries to solve, things to kill, stuff to take, and things not to kill, and stuff not to take.

Even though I started playing in 1980 I still really enjoy the time-honored village-wilderness-dungeon combination for my fantasy roleplaying games. As you are supposed to create the stuff you want to play, all four of my Kickstarter thus far have gone that route.

Shadow, and Furlong Down, both have a structure I am enjoying creating for. You stumble into adventure, there is a village of locations and NPCs to interact with, a dozen or so small dungeons, and lots of wilderness encounters / hexploration, as well. What has gone before is also important in the adventures I create. Not large expansive backstories and history but what I believed is termed “secondary story-telling”. The PC stumble on events from the past while adventuring in the present to make new stories. For example, a dungeon may have been explored by another group of heroes 300, and 30 years and echoes of their endeavors cross-paths with what the current PCs are doing.

EGG– Your work has a decidedly Viking feel. What drives that choice?

JOHN R DAVIS – I am very lucky to be close friends with the artists Jonny Gray. We game and socialize together. His fantasy work has an iron age feel to it. When we started working together I embraced this style and so the publications we have worked on have an ancient Briton, Celtic, Viking like look to them. The English County of Cornwall comes to mind but avoiding the Arthurian legends of that area, and having a more Poldark inspiration. The roots of Last Prayer came to me when I was on Holiday in Cornwall.

EGG – For The Last Prayer of the Dying and The Cruellest Mistress of All, you made those adventures available for 5e as well as Pathfinder 1e and OSR systems. Your most recent campaigns for The Mysterious Happenings at Furlong Down and The Shadow Over Dunsmore Point are only for 5e, what inspired you to focus on 5e over the other systems?

JOHN R DAVIS – I am finding it a very creative and happy ‘middle’ for myself. Much as I like OSR games (and I have created a lot based on The Black Hack) and Pathfinder (my first publication was a 200,000 word 4-part AP for AAW) I find the 3 systems different enough to create for that a lot of re-write is needed. I like to mess with some of the bits of minutiae of game systems and expand those small details into plot! So, in 5th ed Gargoyles are immune to poison and petrification, which makes them an excellent way to guard against medusa! That doesn’t hold true for Pathfinder! 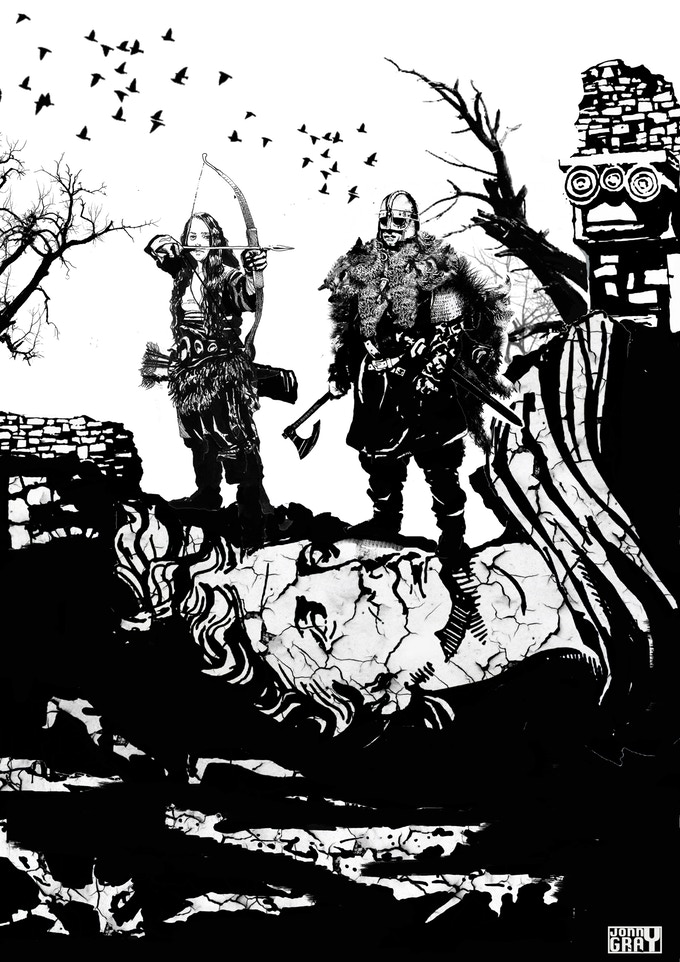 EGG – Your reward levels on the Kickstarter are economic – generally £7/$10 gets you the full product – and you offer a number of vanity press rewards where the backer can create content ranging from locations to NPCs to weapons and more for as little as £10/$14. Considering the small step up to add a backer’s personal touch to the projects, these sell out fast. How have they helped to influence your projects? And do you have any favorites?

JOHN R DAVIS – Two heads are better than one, so having ideas from 30 is fantastic. All role-players, by the nature of the hobby, are creative and imaginative. It means I get some brilliant ideas for things as simple as a sausage or pie! Flavor in many ways!! You sometimes get an idea that is hard to put into place, but I always try to discuss the input with the pledgers and really change as little as possible. Plus riffing off the enthusiasm of others just drives me on, and I am more than willing to tweak stuff to match. Favorites? I must have used about 120 or more by now in my Kickstarter. Not sure I should name names! Selmas’ Wet Traders spring to mind by your good self and the Merfolk within will feature in part 3 of the Chronicles of Kernow which is on my to-do list for later this year!

Vanity Press Awards? That’s a cool term by the way! Never heard that before.

EGG – I started my RPG “career” by backing a number of RPGs that offered the ability to create content. Since I was building an RPG resume it was sorta like vanity press, so I dubbed those rewards. But, on to better things – Where can those interested in your work learn more about you and your project?

JOHN R DAVIS – I don’t have a massive online presence. I use Google+ and Facebook a little bit. I have always struggled with my grammar so creating a written product I thought was a good way to challenge myself.

The current Kickstarter is at: