The following review is an OPINION piece and only reflects the opinion and tastes (because ultimately, all reviews will be based in personal taste) of the reviewer.

*DISCLAIMER: A free version of the PDF for this book was provided, for the purposes of this review.* 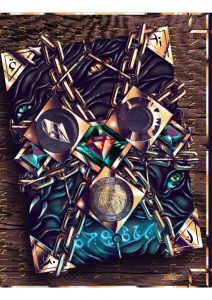 This week we give you the Book of Exalted Darkness (5e)!

Right, so let’s look at the cover first. This is a very vibrant and colorful looking cover, but it does seem a bit strange to have a book image as the front page, rather than having made it as a “book cover”
But let’s skip to the contents.

Let’s start with the fact that this book is HUGE. And I mean HUUUUGE, with the PDF clocking in at 415 pages all told. So yes, this is the biggest book by far that I have ever reviewed, at least as of this moment in time.

As such, the review is going to be a bit brief (hello wordcount) with me diving into the parts that I find the most interesting, but the end review and score will reflect the total package inside.

Now I do have a small caveat before I begin: I don’t actually like my players having evil characters, as it far too often transforms into moustache-twirling evil of utter stupidity, but I do love a truly evil or vile protagonist, if played well, whether that is an NPC or PC, so take my words with a bit of a grain of salt.

First, there is a very thorough going through of the world of Askis (a play on the Axis word? Hmm…), this is a world taken over by Evil, but everyone thinks it’s the other way around. Led astray by two corrupted heroes of yore, the world thinks it’s currently in a shining utopia, but in reality, two of their vaunted heroes (now demigods) are actually the agents of the world’s (and afterlife’s) destruction, even if they originally did so unknowingly. By now, they’ve fully embraced evil. This is the world into which your heroes are thrown, should you choose to play in Askis.

The book of Exalted Darkness introduces a few new mechanics right at the beginning as well, in the form of Sanctity and Sin. Basically how good or evil you are, and how well you hide your evil. (Everyone in this campaign setting is corrupted). You’re also tainted by the sin that you’re embodying, which gives you certain traits, based on the sin. These are the 7 cardinal sins, along with an extra mendacity.

Unlike many campaigns, it is also an industrialized one (my mind was immediately drawn to Eberron with some of the pieces of technology, coming from this so-called utopian world with it’s free (and clean) energy source), and all of the races except tieflings are welcomed. Tieflings are a different story, as they carry fiendish blood and are not welcomed. (That is one regret I have about this book, I feel like a great opportunity to expand upon the tieflings, in a similar way to the aasimar (who do get extra treatment) has been missed. It would have been interesting to see the normal prejudice against tieflings taken to the extreme).

The world itself is probably a bit beyond what Eberron was, with it having even more of a… retro-punk feel. It feels (ESPECIALLY with the art) like a Flash Gordon, Rocketeer or something of that sort. I quite like it, as it makes it stand out a bit more from the steampunk aesthetic that so many use.

I’m not going to dive into more detail than that, suffice to say that it’s got a lot of information on an interesting campaign setting, around 100 pages worth of it. And it all feels thematically appropriate for a world of evil, pretending to e on the side of good.

Next up are a host of player options, including 10 new backgrounds (all with an evil, subversive or criminal feel), 4 new clasess, 16 new archetypes (though some of them might not be technically be called that, like a new warlock patron, but I digress), 46 new feats (and some cool stuff on fleshwarping and the art of the chirugeon – which I cannot WAIT to dig into with my PCs), and a bunch of other options (my particular favorites are the relics. They’re to die for. Quite literally for some of them. 😛 ).

I would be remiss if I did not mention my favorite part of the book though. And that is the (VERY powerful) villains included within these pages. It’s my favorite part of the book, though I think they could have been laid out a bit better, as the separation between them isn’t quite clear, especially with the white text on black background that it uses in many cases.
They were very thematic, and while similar in that they were “the great evil”, their goals and methods were all quite different. In particular, I liked the halfling time-traveler (or potential time-traveler at least), and the dwarf pirate king, but they were simply the ones I considered the standouts, as all the villains had some great things going for them. (Well, I call them the villains, but within the context of this book/campaign setting, one could argue that they were no more villainous than the “so-called” heroes).

There are a bunch of new monsters (though I’m fairly sure I’ve seen a few of them before, like the Warmonger devil, but that is a minor quibble at best), all of which feel right for a book of this type.

And finally the book concludes with 2 short adventures, both of which are cool, but which I will not spoil here. Suffice to say that I’ll be playing them with my own group and that I’m looking particularly forward to sailing the Styx (though I wish there’d been rules for drinking the waters of the Styx itself, rather than just the “secondary exposure” effects).

This is a massive tome, with a ton of content. And for 29.95 you can’t really complain about a 415-page book. The content itself is of great quality, and if you only use ? of the content, you’ll still get your money’s worth. There were (as mentioned above) a few minor quibbles, and only one or two editing errors that I noticed (there might have been more, but in general it was excellent editing), and while the artwork took some getting used to, especially the more “raypunk” parts of it, it was generally of high quality.

As such, the book gets a 5-star rating. Very well done indeed. 🙂