The following review is an OPINION piece and only reflects the opinion and tastes (because ultimately, all reviews will be based on personal taste) of the reviewer.

This week we give you Star Log.EM-003: Collateral Characters!

So, to start off with, we have a cover that shows us someone polishing an armor that uncannily reminds me of a Samurai version of Optimus Prime. When I originally saw it, I certainly didn’t think of a slave worker, more of a maintenance type character, but the image itself is evocative enough and is reused inside once more. I’m not sure how I feel about the pattern used as a background though, but it seems to vary according to each release.

(Disclaimer: Reading the sidebar on page 3, I can see that this has particular repercussions for anyone using Blood Space and Moon Dust and the Starfarer’s Companion, neither of which I had access to at the time of the review, so this review will stand on its own).

The introduction is an introduction to the Star Logs.Em releases and the sidebar does a good job of giving a feel for an Ex-Slave in the above-mentioned campaigns, though the grammar in it feels a little disjointed. A direct quote here is “Although three centuries have passed since, the Xa-Osoro System underwent a system-changing catastrophe called the Regicide when one of its binary stars, Osoro, suddenly imploded into a miniature black hole.” – It feels like that sentence should have been continued.

Next up we have a theme, that of the Collateral itself:

The Theme Knowledge ability of this Theme is nice, but it seems like it’s missing something. Other Theme Knowledge abilities mention 1 or 2 specific skills that it reduces the DC for in specific circumstances, and this does not. Instead, though, it gives you the choice of either Athletics or Piloting as a class skill, again where other comparable abilities only give you 1. It seems like a slightly more powerful version of the ability for it.

The level 6 ability Back to the Wall, feels good, and characterful, giving you a bonus when you or your starship is 0 Stamina Points or Hull Points. I do question however, HOW a ship is supposed to use this ability when it’s a 0 Hull Points, since the Core Book states that “A starship with 0 Hull Points isn’t destroyed, though many of its systems are no longer functioning and it is no longer a threat to its enemies” – So the + to damage is not very useful in that situation, though it might well be to the skill check. 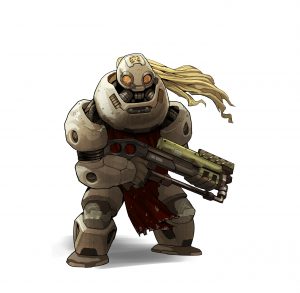 Next, at level 12, we have Hardy, which gives an always useful little boost.

Finally, there is Flower that Never Wilts. Now, this ability is really nice, making you hard to kill, though I am curious as to where the name came from, but that is a sidenote, and just my inner nerd being curious.

Next, we have the Collateral Diehard an archetype for former child-slaves. Considering the topic, I would have expected this to be very, very grim, and when I read the fluff and the abilities, I cannot help but think of child soldiers, which is probably the intent here.

At level 2, we see the ability Iron Flower, which gives you a nice self-heal, which is always handy, and at level 6, we see Bloodied Frenzy, which provides a bonus against fear effects, and a damage increase when you’re at 0 Stamina Point, both of which are nice, and fit the description of the archetype quite well. Finally, at 9th level there’s Firm against the Tide, which again gives you a bonus when you’re at 0 stamina point, this time giving you temporary hit points.

Lastly there’s a section on how to include this in the Blood Space and Moon Dust setting, which gives a nice little look into the setting, but is probably not of great use to anyone outside the setting, as these cannot really be imported into your own campaign, as the information is a bit short, though they can most certainly be mined for ideas.

This is a decent (3-star), but combined with the Blood Space and Moon Dust setting, I feel like this could well be a 4, as you’d be able to, presumably, expand on the information in both setting and this book, by using the other.

In the end, I’m giving this a 4-star rating.

Well done everyone involved, this was a good read, but next time, give me a bit more to work with on its own. 😉

Products Mentioned in this Review