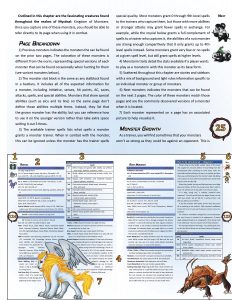 Welcome to 3rd-Party Highlights, where we bridge the gap between companies that aren’t just Paizo or Wizards of the Coast. If they can be found on an Open Gaming site, they’re fair game.

With a massive quality of life update around the corner, Kevin Glusing of Samurai Sheepdog looks at the monsters in Mystical: Kingdom of Monsters by Northwinter Press. In MKoM, players are introduced to the monster trainer class, which captures and trains monsters to fight under her command. Each monster grants the trainer access to a list of spells that she can cast while that monster is active. The book includes a collection of over 150 new and existing monsters, complete with their list of spells and rules for using them as playable characters (see page breakdown to the right).

Naturally, Kingdom of Monsters follows the same premise as other monster-catching games and kids’ shows such as Pokemon, Digimon, and Monster Rancher, but it also offers a different take on the concept, with trainers using their spirit (or essence) to tie monsters to them. Through this natural connection, they form a bond with the monsters, who then fight for them as directed.

In honor of the shows that inspired Kingdom of Monsters, and since it is almost Halloween, we thought today we’d offer a look at one of the first generation of Pokemon, were it to be captured by a monster trainer. That spooky monster is: Gengar.

While it is incorporeal, the gengar can make a touch attack. If it hits, the target supernaturally ages and takes 10d6 damage (Fortitude half ). Targets immune to magical aging are immune to this damage.

+2 Dex, +2 Cha, -2 Con: While they are naturally agile pranksters, gastly monstorin are not known for their toughness.

Monstorin: A gastly is a humanoid with the monstorin subtype.

Medium: As medium creatures, gastly monstorin have no bonuses or penalties due to their size.

Slow and Steady: Each gastly has a base speed of 20 feet, but their speed is never modified by armor or encumbrance.

Low-Light Vision: Gastly monstorin can see twice as far as humans in conditions of dim light.

Prankster (Ex): Gastly monstorin gain a +2 racial bonus to Bluff and Disable Device checks, and those skills are always considered class skills for them.

Spectral Hands (Sp): A gastly can use mage hand and spectral hand each once per day. Its caster level is equal to its character level.

Over the next couple months, Kevin will be expanding on this list of converted monsters over on his Word Press, so keep an eye out there, or follow Mystical: Kingdom of Monsters on Facebook for updates when those monsters become available.